In Poland live 8 species of reptiles, which 2 of them belong to Lacertidae family and one to Anguidae family. On the basis of the Regulation of the Minister of Environment of 9 October 2014 on the Protection of Animal Species all reptiles are covered by protection, wherein lizards are covered by partial protection.

Sand lizard (Lacerta agilis) lives across Poland, especially in lowlands. It can be found in open, grassy areas, meadows, fields, edges of forests, and wasteland. The average life time is approx. 4 years This lizard feed on a variety of invertebrates including beetles, grasshoppers, ants, and snails. It is a relatively small (20 cm) and stocky lizard covered with scales – smaller and rough on dorsal side, and bigger and smooth on belly. The tail is slightly longer than the rest of the body. The head of sand lizard is short with rounded snout covered with discs. On the back of the head are easily noticeable ear holes. The limbs are short and strong with long toes ending in claws. The sand lizard is usually brown or grey with a wide stripe with tiny spots on the back and stripes of brown and cream-colored irregular patches on the sides. Rarely we can found monochromatic individuals. During the mating season males have greenish belly and sides of their bodies, and others spots fade. Females have grey or beige belly. They lay aprrox. 18 eggs, burying them in different places. The young hatch from June to September and have 5-6 cm length.

Viviparous lizard (Zootoca vivipara) occurs all over the country, mainly in mountain and foothill areas, even in cold and wet locations. It grows to 18 cm in length and a thick tail is half of it. This lizard has a small head with a pointed snout and short and weak limbs. The color of its body is brown with ribbons of bright and dark spots along the back and on both sides of the tail. Males are darker, and their bellies are yellow or orange with small spots. Females are paler and their bellies has no spots. There are also completely black individuals. The name of the species is derived from its ability to give birth to live young, that breaks the egg sac during birth. 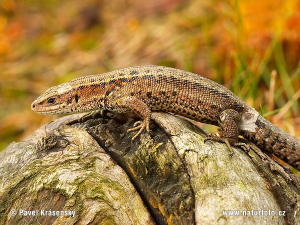 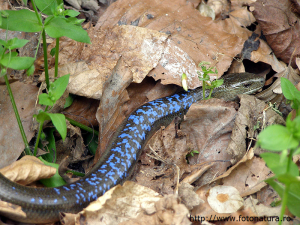